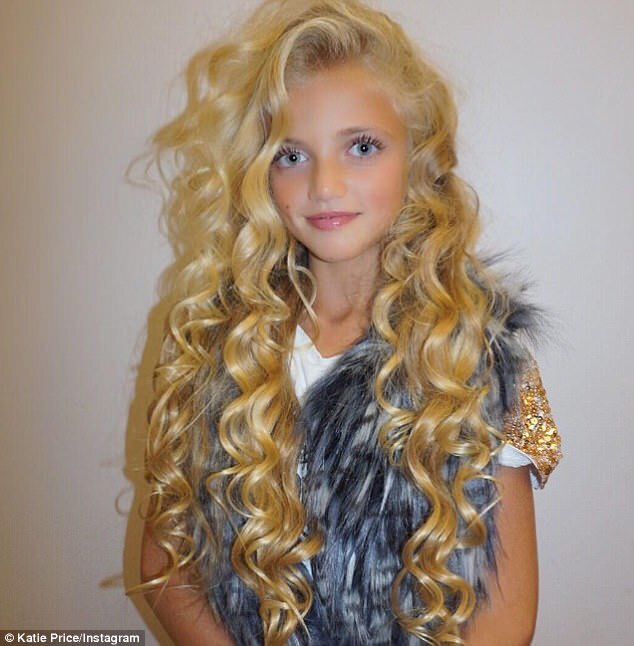 Children should always be that, children. Not made into mini versions of their parents by wearing ridiculous outfits, make up and whatnot. Take glamour model and born-to-shock Katie Price who used to flaunt her oversized knockers in men’s mags under the name ‘Jordan,’ now mother to 6 children by 3 different fathers, is repeatedly in the press at the moment, if not for her sex life with her current husband, sex-cheat Kieran Hayler, but also for dressing up her daughter like a beauty school dropout at the tender age of 10 years old. The current photos of her daughter Princess (yes, that’s her real name) sees Princess with her long golden hair curled in bouncy curls, her face dolled up with make up, her piercing blue eyes stood out by the black mascara and Katie is currently pleased with the message this is giving out to not only her own children but to the masses. She’s 10 years old for crying out loud, her mother shouldn’t deem this as ok. Katie’s son, Junior has already expressed concern over his sisters look especially being posted online, in fear that ‘paedophiles will get attracted’ to him sister.

What part of anything her son is saying doesn’t flag up some form of alarm bells to the mother of six? I get Katie’s world is all for the shock factor but her children shouldn’t be dragged into her entertainment. They’re too young to make decisions for themselves, this isn’t about her anymore, this is about protecting her children from the online world and it’s not all pretty.

I blog about my family life, the road from moving from London to Ramsgate, pregnancy to motherhood and share stories about my life as a 30-something mum of one. Emily is 8 months old and whilst I do share certain pictures of her, I don’t and will not share certain photos of her, you know any photos of her undressed, because she’s a child and I wouldn’t approve, so why would she? What goes through Katie Price’s head when she posts these pictures up? Is he doing it for personal gain? To stay in the limelight? To start an argument?

The worrying thing out of all of this is not being called a princess or beauty queen or whatever crap her mum is feeding her, but the negative press that will come from this. As she grows older, being in the limelight can’t be a great thing for any child’s confidence (no matter what age) and the negative comments will only get worse in years to come. There are lots of girls and boys, who like to play dress up, we’ve all done it, all kids have, if you haven’t, there’s something wrong with your childhood. This type of role play has been a part of millions of childhoods for years. But there’s a fine line between playing dress up for fun and dressing up your child for attention. Katie has sold her soul to the press, she did it the day she became a page 3 model and has done it ever since. But Katie is all about the shock value, it’s just crazy to see she’ll use her children to get the attention she clearly needs.