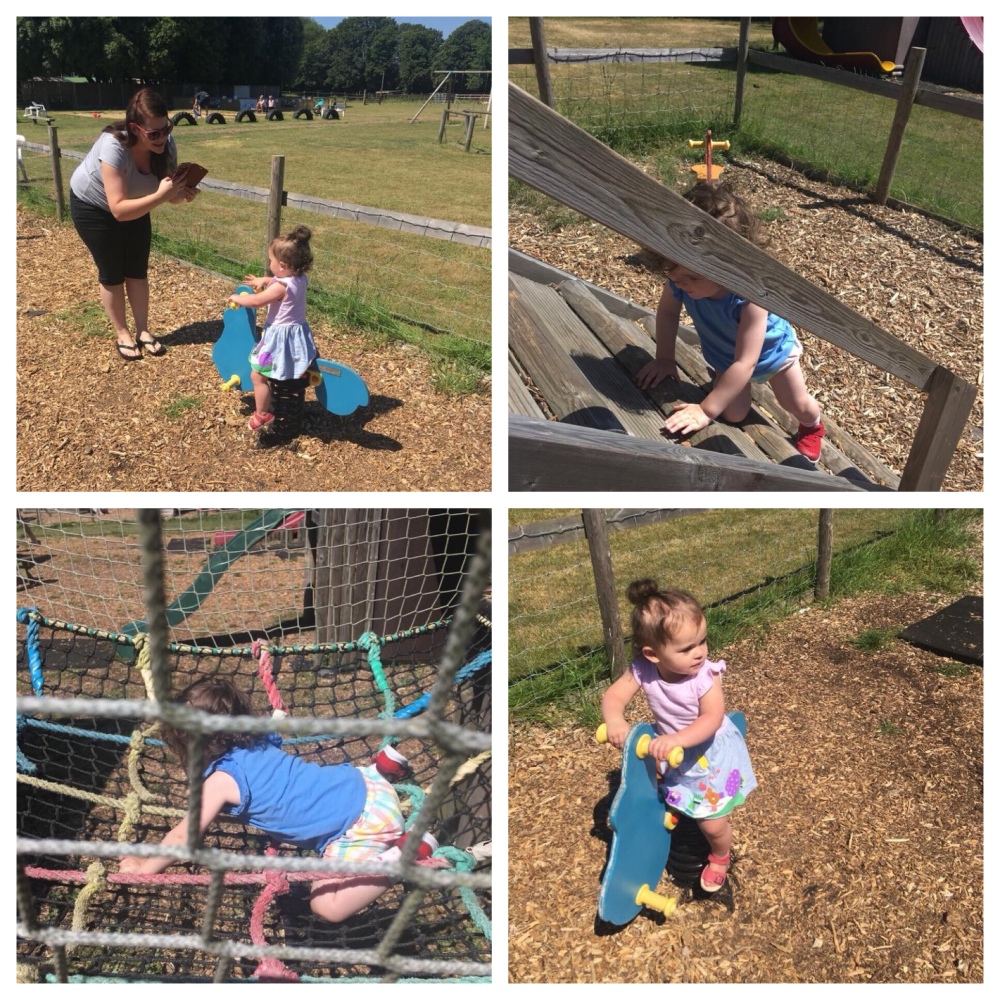 Emily and I have only been to Jungle Jim’s on two occasions including our last visit. The last time was last year with Clare and her daughter Scarlet where we visited the inside soft play area for children. Although the soft play area was ok, it wasn’t great for them, as they were restricted to a little area that was often invaded by older children leaving our girls little area to play with. Besides the size of the area, it was a little cramped with far too many children running wild amongst chatty mums and technology-obsessed dad’s. The small toddler play area entertained Emily and Scarlet for a little while but their attentions soon disappeared – Emily as always off on her mission to escape and Scarlet happily supporting my Dora the Explorer.

This time, Emily and Scarlet are older, braver and more confident, oh and of course they’re walking/running everywhere now. Jungle Jim’s is based in Quex Park in Birchington and in the summer provides more to do and explore for children and adults of all ages. Jungle Jim’s prides themselves on being the largest indoor and outdoor play area (think they’re exaggerating the indoor area!), with a build a base laser and nerf tag arena, Quez maize maze, and Queen craft village.

We visited on what seemed like the hottest day of the year to visit the outdoor play area. The area has swings, slides, a zip wire, a climbing wall, a large adventure climbing frame, football goal, basketball hoops, a big sandpit, a toddler area and a lot of space to run around. Sounds appealing right? There is nothing bad to this but for children under 3, it’s limited. Emily wanted to join the older kids but was far too young, the small toddler area got boring for our girls after a short while and both were far more interested in scribbling on their colouring sheets at lunchtime than the actual playground itself. They were just too young. The area, although great for older kids should actually be divided off from little children. Emily attempted a climbing frame which I hadn’t realised until a few minutes after, and she was half way up it, that it were for children over the age of 5. Once she got to the top, she didn’t like it anymore, I didn’t either and I climbed to the top, too high for me! Emily went down the slide and it terrified her. Apart from the big boards saying this or this age group, children aren’t really going to bother reading the signs and most of the parents preferred to sit back, chit-chat and drink tea than run around looking for the signs or precautions.

We’ll be back here sometime in the future when Emily is a little older. There are plenty of hot and cold meals on offer, including hot and cold refreshments as well as beers on tap, wine and bubbles in the fridge if the weekend needs a cool down period and sometimes the alpacas are out the back for all ages to feed them their food at 50p a go.